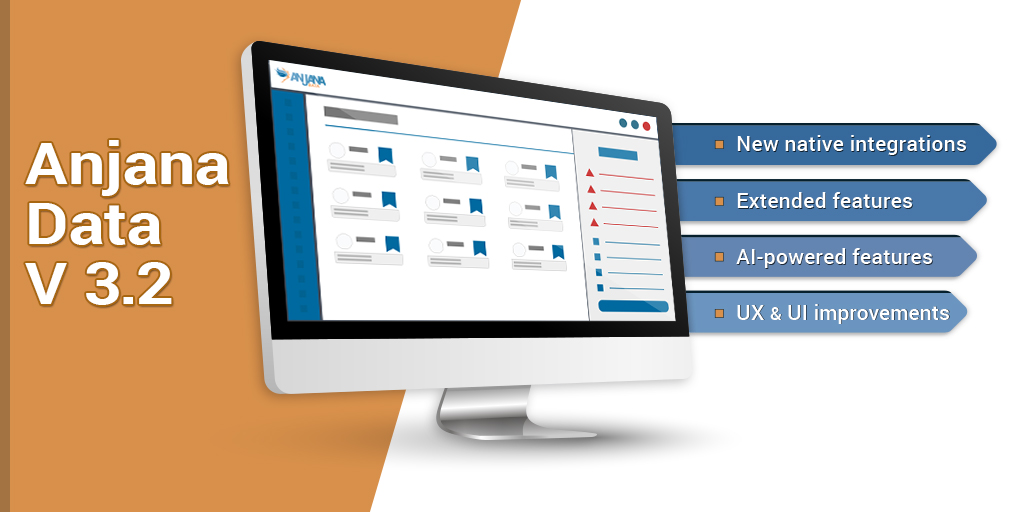 Anjana Data announces a new version of its solution for Data Governance with new features, available from 15th of July.

The new version of Anjana Data incorporates extended features for the Business Glossary such as the possibility to create new types of entities with their own attributes based on dynamic forms. Many of the enhancements are related to UX & UI improvements, auditing functions, back-end & architecture improvements; the addition of AI-powered features for user assistance and new capabilities for workflows configuration. In addition, this new version also includes new native integrations with data platforms.

“In this new version of Anjana Data, we have focused on consolidating the features already offered by the solution, improving above all the design of the user interface and offering a better user experience. In parallel, we have invested a lot of time and effort in extending native integration capabilities to provide proactive and preventive governance over data platforms such as Azure, AWS, Denodo, Snowflake, as well as Cloudera and Hadoop. Finally, we can already say that we have included the first use cases of user assistance based on Artificial Intelligence & Machine Learning algorithms. However, version 4.0, which will be released at the end of September this year, is going to be a new turning point, we are taking an incredible rate for a company of our characteristics.”, says Mario de Francisco, CEO at Anjana Data.

Anjana Data aims to become one of the reference solutions in the world of Data Governance with an innovative and disruptive approach, building bridges between the worlds of business and technology and offering adaptation capabilities and flexibility not offered by any other solution until now, which are more than necessary in the new era of Big Data & Multi-Cloud.

That’s why in this new version, Anjana Data incorporates enhanced permissions and privileges management within the Business Glossary based on the defined governance model. In addition, it offers the possibility to create new types of entities with their own attributes based on dynamic forms. In this way, the organization can create as much types of entities as wanted (i.e. metrics, reports, business rules, data quality rules, KPIs, …).

Regarding relations between entities, Anjana Data includes extended attributes and it is also possible to create different types of relations to classify them from a semantic point of view. Every object may be related to any other object not only within the Business Glossary but also to any object within the Data Catalog. By creating the objects and defining the associated template, attributes may be set as mandatory or optional.

Other improvements in the new version are related to navigation between objects in the whole UI. In Anjana Data, an object is any element within the metamodel containing metadata attributes.

To optimize the user experience in the Business Glossary, Anjana Data has a new assistant wizard for the creation of objects. This is especially useful as the wizard will guide the user in order to make it easier for her/him to create new objects no matter the type (any type of entity and any type of relation) and the user may choose between manual creation or importation from an Excel spreadsheet based on the names of the headers not requiring a fixed structure.

Anjana Data has also introduced an enhanced view of each object where the most important and recent information related to the object is shown in its main view and a new section included within the view of the objects where all users to the object are displayed.

Anjana Data continues to advance in its AI-powered features, so a new module has been integrated within the architecture of the solution in order to leverage AI-powered features for user assistance based on metadata information, data profiling techniques and users behavior.

In this new version, the corresponding algorithms run on the background and will rise recommendations to the users in a non-invasive way. Algorithms for specific use cases will be released within the future upgrades, being the first ones included in this release:

Although the new version of Anjana Data is focused on user experience improvements, another important part of this new release is the audit features. Thanks to the Minerva module (based on SolR) it is now possible to view more detailed information in the internal audit logs, as well as have the ability to select which actions need to be audited and which not.

Thus, every time that a value of any attribute changed, a snapshot of the object will be saved in order to allow the regeneration of an object with the corresponding values in a specific time during its history.

In terms of native integrations, thanks to the new plugins added to Tot and Heimdal, new native integrations have been developed to perform different kinds of interactions between Anjana Data and the technologies used within several data platforms.

From 15th of July, Anjana Data v3.2 will be available to users interested in discovering how Anjana Data can add value to the data strategy, changing the vision of Data Governance in an Organization. The company is also already working on a new version v4.0 (planned for the end of September this year) which will again mark a milestone in the evolution of the solution.